The Expression of Progesterone Receptors in Meningiomas of Different Grades

Background: Meningiomas are slow growing intracranial and intraspinal neoplasms with a tendency to recur locally. WHO grades them as I (benign), II (atypical) and III (anaplastic) in order of their increasing aggressiveness, based on histological parameters and brain parenchymal invasion. Progesterone receptors (PR) are more prevalent amongst the lower grade meningiomas. The objective of this study was to determine the immunohistochemical expression of progesterone receptors in meningiomas of different grades.
Material and Methods:A total of 100 cases were selected over a period of 2.5 years. Three to five microns’ thick sections stained with Hematoxylin and Eosin were examined microscopically by a team of two Histopathologists and graded into grades I, II and III, according to 2016 WHO classification criteria. Another section of the original tumor was stained with progesterone receptor antibody using the conventional immunoperoxidase method. Stained slides were than examined by the same team of Histopathologists and declared positive (if nuclear staining was observed in more than 10% of tumor cells) or negative. Statistical analysis was done using SPSS version 21.
Results:Out of a total of 100 cases of meningioma, there were 79 cases of benign/typical WHO grade I, 15 cases of atypical/ WHO grade II and 6 cases of anaplastic/ WHO grade III tumor. PR status was positive in 89.8 % (71/79) of grade I meningiomas and 46.6 % (7/15) of grade II/Atypical meningiomas. The 06 cases of Anaplastic/WHO grade III tumors were negative for PR. There was a higher prevalence of Progesterone receptors in female patients (89.8%; 53/59) as compared to male meningioma patients (60.9%; 25/41).
Conclusion: We observed a decreased expression of progesterone receptor in higher grades of meningioma in this study. It is an effort to explore conservative treatment options for inoperable lesions, as anti-progesterone therapy may hold a promise as a new treatment option in the near future
Key words: Meningioma, Immunohistochemistry, Progesterone receptor

This study was conducted in the Histopathology Department of Federal Government Polyclinic, PGMI, Islamabad from 1st January, 2013 to 30th June, 2015. It was a cross-sectional study with a sample size of 100, which was calculated by WHO sample size calculator. Consecutive non- probability sampling technique was employed including all cases reported as Meningiomas of any grade. Cases of both genders in age range of 25 to 70 years were included. However, stereotactic biopsies, tissue exhibiting fixation artifacts and inadequate scant tissue were excluded. Freshly cut, three to five microns’ thick sections, stained with Hematoxylin and Eosin (H & E) were examined microscopically by a team of two Histopathologists (a Consultant and a Resident Histopathologist). All cases were graded according to WHO grading system. Another 6 microns thick section of the original tumor were stained with progesterone receptor antibody (anti-PR monoclonal antibodies purchased from DAKO) using the conventional immunoperoxidase method. Benign breast tissue was used as positive controls. Stained slides were than examined by the same team of Histopathologists and declared positive (if nuclear staining was observed in more than 10% of tumor cells) or negative for PR expression.11
SThe data was entered in SPSS version 21. Frequency and percentages were used to calculate qualitative variables like presence or absence of progesterone receptors by use of immunohistochemistry in meningiomas and its grades. Mean and standard deviations were used to calculate quantitative variables like age of the patient. Tumor areas were first scanned on low-power for maximally stained regions and the stained nuclei were then counted at high-power magnification(40X).

A total of 100 patients, with the diagnosis of meningioma were included, in this study. Mean age of the patients was 50.33 ± 12 years. Female predominance was observed with 59% females (n=59) and 41% males (n=41). According to WHO criteria, of all the subtypes of meningioma, the most commonly found entity was benign/typical WHO grade I tumors (n=79 cases), followed by atypical/grade II tumors (n=15 cases) and anaplastic/grade III tumors (n=6 cases), respectively. Brain invasion was found in 3% of cases and none of the cases were recurrent tumors.
Overall the PR status was positive in 78% (n=78) of meningioma cases in this study, while PR expression was negative in all the three cases showing brain invasion. PR status was positive in 89.8 % (71/79) of grade I meningiomas and 46.6 % (7/15) of grade II/Atypical meningiomas. The 06 cases of Anaplastic/WHO grade III tumors were negative for PR (Figure 1). There was higher prevalence of Progesterone receptors in female patients J Islamabad Med Dental Coll 2019 67 (89.8%; 53/59) as compared to male meningioma patients (60.9%; 25/41) as shown in Figure 2. 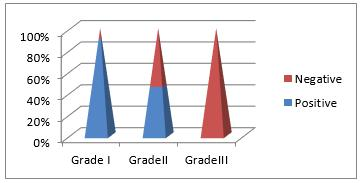 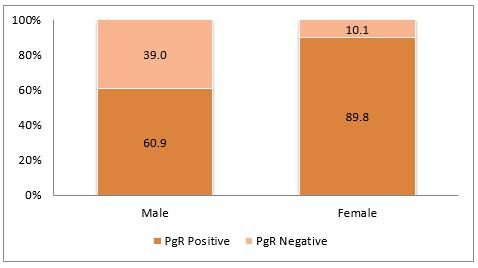 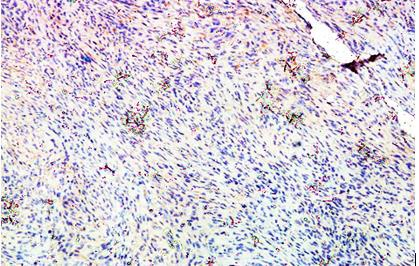 Meningiomas account for 20–32% of all the primary intracranial tumors. According to the WHO 2016 classification system, meningiomas are classified into 3 histological grades and 15 subtypes. This histopathological classification is generally used to predict the clinical course of meningioma. 13 Even after complete removal, WHO grade I meningiomas frequently recur. The role of steroid hormones in the progression of meningiomas is still a matter of controversy. Our study aims to highlight the expression of PR in different grades of meningiomas. The results establish that immunodetection of progesterone receptors is inversely proportional to the histological grade of the tumor. Hence this can be used for assessing the biological behavior of meningiomas. Statistics of this study are similar to several other studies, which concluded a more favorable prognosis for PR positive meningiomas.10,11
We observed that PR expression was higher in grade I tumors than grade II and III tumors. These findings are also in concordance to published literature. Similar findings were noted by Iplikcioglu and colleagues who found that PR expression was higher in WHO grade I meningiomas than grade II and III.16 Cahill et al and Brandis et al showed that malignant meningiomas are devoid of PR and estrogen receptors. Furthermore, Whittle et al reported that PR negative meningiomas were biologically more aggressive than PR positive meningiomas.17 Our data confirms the presence of significantly higher PR values in benign meningiomas compared with WHO grade II or III tumors. The PR expression exhibits marked heterogenicity within the same tumor, owing to the various innovative surgical procedures applied as well as intrinsic heterogeneous nature of the tumor itself. 10
In addition, our study observed that PR expression was more in female gender than males. In 89.8% of female patients, Progesterone receptors were found in meningiomas while it was present in 60.9% of male patients. Perrot-Applanat and colleagues also found similar findings that progesterone receptors were immunostained in 79% of female patients in contrast to 58% of male patients. 18 Mukhopadhyay studied the PR expression along with ER and Ki -67 and found a reciprocal expression of PR and ER i.e. higher the grade of the tumor the more is the immunoreactivity for ER but PR expression was lost with higher grade.19
One limitation of our study is that we were unable to follow up the patients to see the behavior of the tumor in vivo due to time constraints.

Our study is a step towards better understanding of pathophysiology of meningioma. It supports the conservative management of meningioma through noninvasive hormonal therapy instead of surgery, which has its own complications. However, more work needs to be done, incorporating other clinical and histopathological parameters as well, so that newer treatment option of anti-progesterone therapy can be further explored.