Effect of Nigella Sativa on Oxidative Stress in Post-Menopausal Females

Background: The permanent cessation of menstrual periods in menopause causes a decline in estrogen levels and increased oxidative stress. Both of these factors lead to menopausal symptoms, cardiovascular diseases and osteoporosis in the postmenopausal females that negatively affect the quality of their lives. Antioxidant properties of Nigella sativa are due to its natural ingredient “thymoquinone” and have been studied in various animal and human studies. This study was done to determine beneficial effect of nigella sativa. Material and Methods: Thirty postmenopausal females were recruited in the study after taking consent. Nigella sativa was administered at a dose of 1g/day for 2 months after breakfast. Blood sample was taken for pre and post treatment glutathione (GSH) estimation. The SPSS version 21 was used to analyze the data. Paired t- test was applied. P value of< 0.05 was considered significant.
Results: Regarding the effect of the Nigella sativa on oxidative stress, result indicated a highly significant increase from baseline (p<0.0001) after 8 weeks’ consumption of Nigella sativa. The effect size was calculated both for biochemical parameter GSH and general parameter like weight and BMI. The result of the effect size calculation showed larger effect size for GSH levels (3.9) and moderate sized effect for weight and BMI.
Conclusion: Nigella Sativa showed beneficial antioxidant effects in post-menopausal females and might be responsible for a better quality of life in these women.
Key words: Nigella sativa, Menopause, Oxidative stress.

Menopause is characterized by end of menstrual cycles in the absence of any pathological or physiological cause for at least 12 consecutive months. Ovarian functions gradually decline as the females’ approach menopause resulting in decreased concentration of both estrogen and progesterone.1

At present, medicinal plants are used for treatment and prevention of many diseases due to easy availability, affordability and safety.6 Among different medicinal herbs, Nigella sativa (Kalonji) is one miraculous herb having historical and religious background.7There has been extensive research on the biological qualities and therapeutic properties of Nigella sativa like use as antidiabetic, anticancer, antimicrobial, antipyretic, anti-inflammatory and as analgesic.7 In addition to all these properties, Nigella sativa has remarkable antioxidant properties.8 Thymoquinone (TQ) is the main active component of Nigella sativa that has been found to scavenge all the reactive oxygen species (ROS).9 An animal study showed the antioxidant property of TQ as it protected the liver against oxidative stress caused by hepatic carcinogens.10 Another study also showed significant reduction in cerebral oxidative stress by using TQ in rats.11 Likewise, TQ increased the antioxidant enzymes significantly in animal model of colonic carcinogenesis proving excellent antioxidant properties.12Thus in short, menopause results in increased oxidative stress. By administering Nigella sativa can have beneficial effects for postmenopausal women by decreasing oxidative stress.

This non-randomized clinical trial was conducted at This interventional study was conducted at Post Graduate Medical Institute, Lahore. From Feb. 2017 - April, 2017. Ethical approval was taken from Ethical Review Board of Post Graduate Medical Institute (PGMI), Lahore. A total of 30 post-menopausal females were inducted through non probability purposive sampling. Inclusion criteria was healthy non obese postmenopausal females with age range 45-55 years. Subjects consuming hormonal replacement therapy (HRT), phytoestrogens and antioxidant medications such as vitamin E and vitamin C were excluded from study. Good quality Nigella sativa seeds were brought from market and grinded with the help of electric grinder making a fine powder. Empty capsules of 500 mg size were filled completely with powder manually. A total of 60 capsules were placed in each bottle and stored at room temperature.

Written informed consent was taken from every subject. General physical examination was done. Total 5 ml of the blood was taken in the vacutainer for measuring GSH levels before the Nigella sativa supplementation. Serum was extracted by centrifuging the blood at 3000rpm for a period of 20 min. Serum was stored at -20 ºC. Study subjects were advised to take 1g of Nigella sativa (2 capsules 500mg each) for 2 months daily after taking breakfast.14 A compliance tabulated sheet was provided to every subject and they were asked to write ‘yes’ after consuming daily dose. This sheet was reviewed after every 15 day follow up visit. After 2 months, blood was again collected for post treatment GSH levels. Serum GSH was measured by GSH ELISA Kit (Glory Science Co.). Absorbance was read at 450nm. The detection range of the kit was 30-500 ng/l.

Data was entered and analyzed by SPSS version 21. The quantitative variables were expressed as mean± SD. The pre and post treatment means were compared by paired t-test. P value of < 0.05 was considered statistically significant. Calculation of effect size was done by Cohen’s d test and interpreted as up to 0.2 = small sized effect, up to 0.5 = moderate sized effect, 0.8 or more= large sized effect.15

This study was conducted on 30 postmenopausal females. General characteristics of the study population are presented in Table I. After administration of Nigella sativa for 8 weeks, result showed a significant reduction in body weight (p= 0.012) and BMI (p=0.011) (Table II).


Regarding the effect of the Nigella sativa on oxidative stress, result indicated a highly significant increase from baseline (p<0.0001) after 8 weeks’ consumption of Nigella sativa (Figure 1). The effect size was calculated both for biochemical parameter GSH and general parameter like weight and BMI. The result of the effect size calculation showed larger effect size for GSH levels (3.9) and moderate sized effect for weight (0.5) and BMI (0.6) as given in Table III. 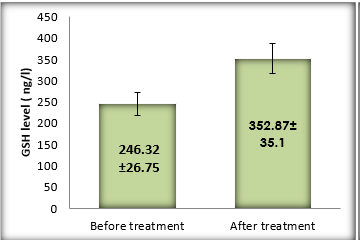 Figure 1: Changes in the serum level of GSH after 8-week supplementation of Nigella sativa

Thus, menopause results in increase in oxidative stress and oxidative stress result in menopausal symptoms. Nigella sativa has improved GSH level indicating reduction in the oxidative stress, thus may help in improving in the quality of life of the postmenopausal females. The major limitation of the study was that no control group was included in the study.

Nigella sativa caused reduction in oxidative stress in postmenopausal females and might be responsible for a better quality of life.