Background: Neonatal sepsis is the third most common reason of neonatal mortality in Pakistan. Blood culture, the gold standard test for diagnosis of neonatal sepsis, is time consuming. Therefore, rapid diagnostic tests with good specificity and sensitivity is needed for accurate and early diagnosis of this condition. The objective of this study was to determine the diagnostic value of abnormal (≥ 0.2) immature-to-total-neutrophil ratio in neonatal sepsis.
Material and Methods: This cross-sectional study was carried out on 288 neonates, aged 0-28 days, admitted with suspected sepsis. Detailed history of the neonates was recorded including gender, age, birth weight, maternal age, gestational age and clinical features. Blood culture and Peripheral blood films were done in each case. Differential leucocyte counts, total Polymorphoneutrophil count (PMN), immature neutrophil count, mature neutrophil count and calculation of I/T ratio was carried out in the Pathology Department of PIMS, Islamabad. The study outcome was divided into three groups on the basis of positive or negative blood culture and I/T ratio as normal, probable sepsis and proven sepsis group. Data was analyzed by SPSS version 21.0. Diagnostic value of I/T ratio was determined in NS by calculating values of sensitivity, specificity, positive predictive value (PPV) and negative predictive value (NPV) by considering the blood culture as the gold standard test of NS.
Results: The mean age and weight of the neonates at the time of admission was 1.1 (± 0.6) days and 2.51 (± 0.40) kg, respectively. About 60% of the neonates were males and 118(41%) neonates had I/T ratio of ≥ 0.2. On the basis of positive or negative blood culture and I/T ratio, 82 (28.5%) neonates were diagnosed as proven sepsis, 43 (14.9%) neonates had probable sepsis and remaining 163 (56.6%) neonates were declared as normal. Out of 82 neonates with positive blood cultures, 75 (91.5%) had I/T ratio ≥ 0.2, while 7 (8.5%) had I/T ratio ≤ 0.2. The sensitivity, specificity, positive and negative predictive value and diagnostic accuracy of abnormal I/T ratio to diagnose neonatal sepsis was 91%, 79%, 64%, 96% and 83%, respectively.
Conclusions: Due to substantially high diagnostic accuracy of I/T ratio ≥ 0.2, we recommend it as a useful, rapid and cost-effective tool in accurate diagnosis of neonatal sepsis. 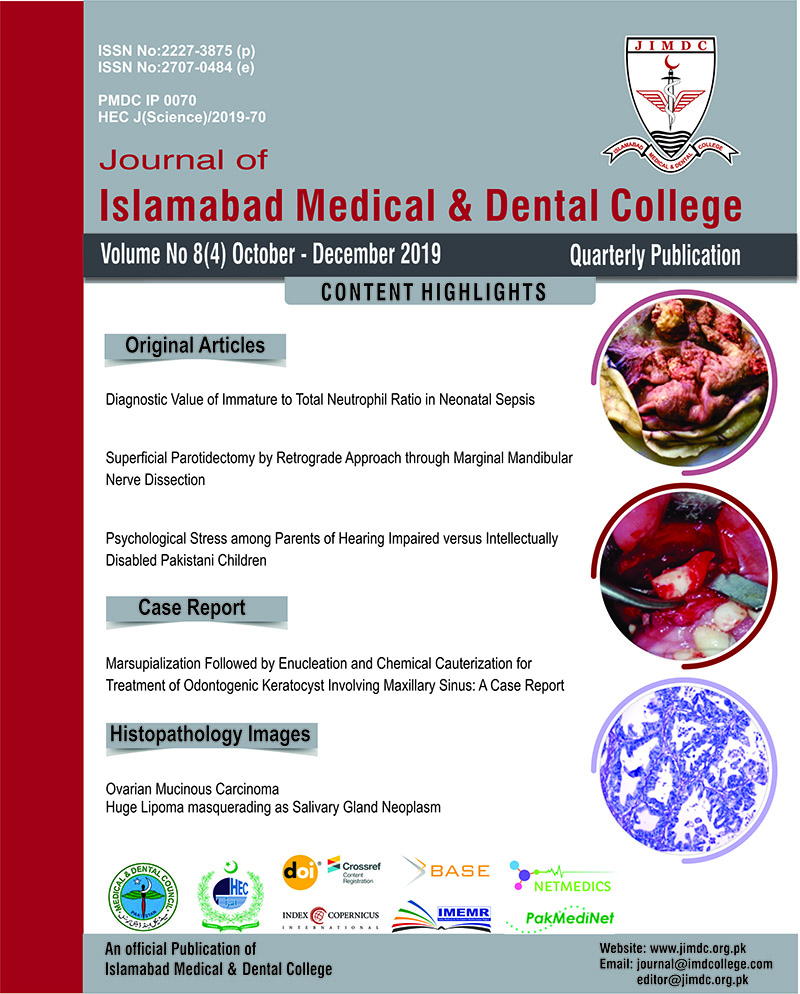 This is an Open Access article distributed under the terms of the Creative Commons Attribution License (http://creativecommons.org/licenses/by-nc/4.0), which permits unrestricted use, distribution, and reproduction in any medium, provided the original work is properly cited.