Objective: To determine the frequency of Candida, Trichomonas and Pyogenic infection, in Pelvic inflammatory diseases (PID) Patients and Methods: This cross-sectional study was carried out in Gynecology OPD of Abbasi Shaheed Hospital Karachi and Baqai Hospital Karachi from November 2013 to January 2014. The study included 100 females of 20-40 years and above with history of vaginal discharge, low back pain, itching, bleeding. The subjects were divided on the basis of various socioeconomic status (poor, middle, rich) groups. Females who were pregnant or had recent history of abortion were excluded from the study. For assessment, Pap smear, wet preparation and high vagina swab was collected from cervix and vagina.
Results: In our study Candida albican 35%, Trichomonas infection 30% and pyogenic infection 35% were seen in various age groups. Majority of the cases were between 20-40 years. It was also observed that trichomoniasis was observed in lower and middle class females and not in upper class females.
Conclusion: Trichomonas, Candida and Pyogenic infections were found to be most commonly associated with pelvic inflammatory diseases. A relatively higher frequency of Candidiasis, and Pyogenic infections were observed in upper and middle class, whereas high frequency of trichomoniasis was found in lower and middle class women. 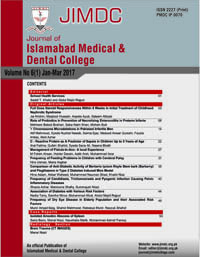